EAO announces the first opportunity for East Asian astronomers to access time at Subaru telescope for the now-open 17A Call for Proposals.

For details please visit: EAO proposal process for the Subaru 17A Call

The EAO Newsletter is out now – enjoy!

For the latest newsletter and for copies of our past newsletters please visit: http://www.eaobservatory.org/jcmt/public/newsletter/ 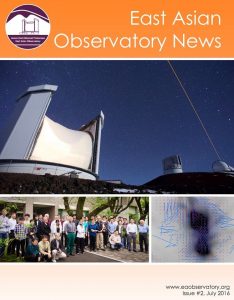 New Horizons for the JCMT with the East Asian Observatory: Latest Science from the JCMT

The East Asian Observatory has forged a new path for the JCMT following the successful transfer of operation to EAO in March 2015. Operations immediately resumed with an EAO Pilot Science semester initiated in late March, taking successful science with JCMT’s signature instruments, and recommencing commissioning of the additional instrument elements (Pol-2 and FTS-2) for SCUBA-2. In this special session, we will present the latest results from the JCMT Legacy Surveys, completed in early 2015. We will also show some of the recent results from Pilot Science, and discuss the plans EAO and its partners have for continuing to keep the JCMT at the cutting edge of sub-millimetre science.

Program and speakers can be viewed here Full newsletter can be read here On May 5, 2015, the East Asian Observatory (EAO) announced its Joint Communique with the world’s largest astronomical organization, the European Southern Observatory (ESO) in a meeting hosted by Academia Sinica Institute of Astronomy and Astrophysics (ASIAA) in Taipei, Taiwan. The convention was attended by Dr. Tim de Zeeuw, the ESO Director General, and top members of the EAO from several countries. Delegates discussed the details of cooperation between the two observatories and shared their visions for the future. Aspiring to be the counterpart to ESO in Asia, Dr. Paul Ho the Director General of the EAO said that East Asia and Europe are looking forward to more global collaboration in the future. In the East Asian region, astronomy has undergone rapid growth over the past two decades, and very strong programs now exist in regional institutes, NAOJ.NAOC, KASI and ASSIA with these institutes currently operating and building some of the most advanced instruments in astronomy. In 2014, these developments led to the establishment of the EAO, a joint observatory for East Asia, whose mission is to be competitive internationally in building and operating the largest and most advanced astronomical facilities. In 2005, ASIAA, KASI, NAOC, and the NAOJ formed the East Asian Core Observatories Association (EACOA) to promote collaboration and cooperation, and share regional resources and manpower. This in turn led to the formation of the East Asian Observatory (EAO) with Dr. Ho being elected as the first EAO Director General. EAO’s first astronomy operation started on 1 March 2015 with the James Clerk Maxwell Telescope based on Mauna Kea in Hawaii.

Dr. Tim de Zeeuw commented: “The recent growth in astronomy in East Asia is remarkable and we at ESO are very impressed by the ambitious future plans presented at this meeting. There are many possible future areas of collaboration with ESO to be investigated.”

The European Southern Observatory (ESO) is the pre-eminent intergovernmental science and technology organization in astronomy. ESO is supported by 16 countries, which represent about 30% of all the astronomers in the world. ESO operates some of the premier astronomical facilities in the world, including the Very Large Telescope which consists of four 8.2m telescopes in Paranal, and the Atacama Large Millimeter/sub-millimeter Array (ALMA) together with North America and East Asia. ESO is also building the 39m European Extremely Large Telescope which will be the largest optical telescope ever built. Attendees on this historic occasion