In the JCMT Science Archive one can find data obtained with the following continuum receivers. 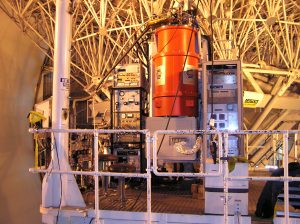 SCUBA was a submillimetre continuum array receiver, with a field of view 2.3 arcmin in diameter. It had two hexagonal arrays of bolometric detectors (or pixels); the Long-Wave (LW) array had 37 pixels, while the Short-Wave (SW) array had 91 pixels. Both arrays were used simultaneously by means of a dichroic beamsplitter, which in SCUBA’s prime mode corresponded to observing at 450 microns on the SW array and 850 microns on the LW array. Each of the pixels had diffraction-limited resolution, corresponding to about 7.5 arcseconds at 450 micron, and 14 arcseconds at 850 micron. The arrays could be used to make maps, in either the “jiggle-map” or “scan-map” modes, or as photometers, where only the central pixel on each array is used. A polarimeter could also be attached to the front window of SCUBA which then allows polarimetric photometry and jiggle-map modes.

SCUBA was cooled to below 100mK by means of a dilution refrigerator, which means SCUBA’s sensitivity is limited by the photon noise from the sky and telescope background at all wavelengths. The background power was further limited by a combination of single-moded conical feedhorns and narrow-band filters.