A research team led by Japanese astronomers using data taken with the James Clerk Maxwell Telescope (JCMT), have conducted detailed radio spectral observations of molecular gas around the nucleus of our Milky Way Galaxy, Sgr A*.

As a result, the team has discovered two compact molecular clouds that have extremely broad velocity widths at distances of approximately 20 light years from Sgr A*. Despite the fact that these peculiar clouds have large kinetic energies, no energy source has been found there. Thus, the team interprets that each of the clouds is driven by the high-velocity plunge of an isolated (invisible) black hole without a companion star into a giant molecular cloud.  This implies that multiple “stray black holes” are floating around a supermassive black hole lurking at the Galactic center. 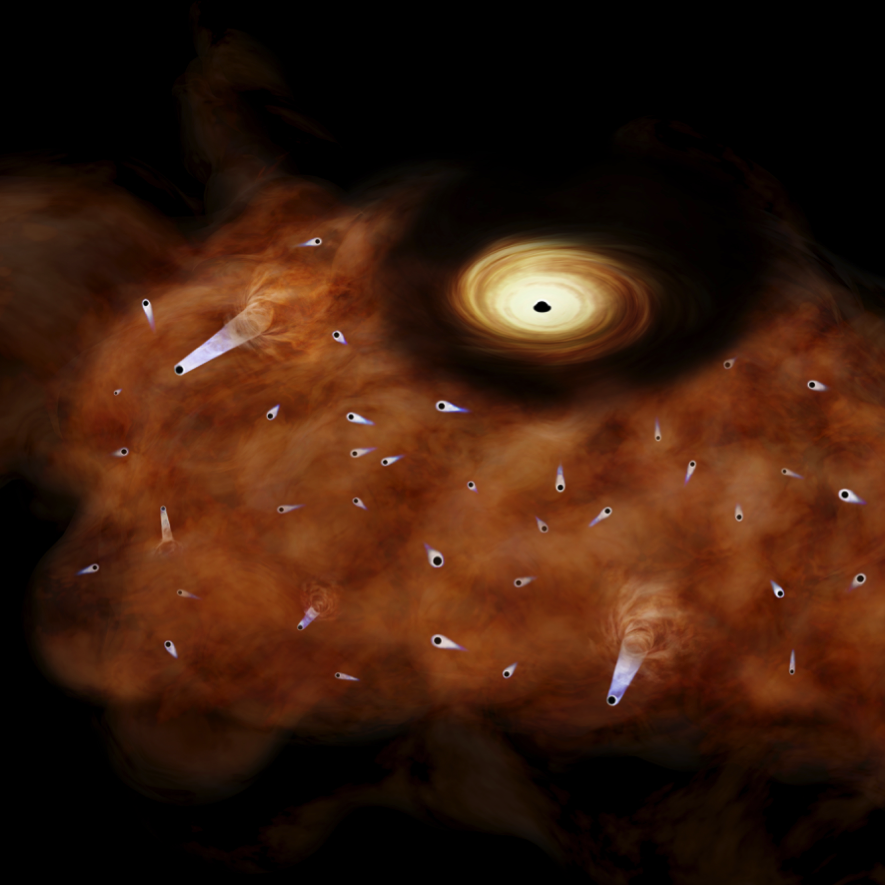 Illustration of stray black holes floating around a supermassive black hole at the Galactic center.

The Galactic nucleus Sgr A* is located at a distance of approximately 26,000 light years from the Earth, and recognized as a supermassive black hole with 4 million solar masses. The origin of the supermassive black hole remains unresolved. In contrast, a stellar mass black hole, which has a mass ranging from about three to several tens of solar masses, is known to be formed by the gravitational collapse of a massive star heavier than 30 solar masses. It is theoretically predicted that several hundred million stellar mass black holes lurk in the Milky Way.

The research team conducted spectral line observations of the Galactic central region within 30 light years of the Galactic nucleus Sgr A* to investigate kinematics and physical properties of molecular gas surrounding the nucleus, using the JCMT. In the observations, the team discovered two unusual molecular clouds (HCN–0.009–0.044 and HCN–0.085–0.094) with diameters of about 3 light years and extremely broad velocity widths wider than 40 km/s (See Figure b below). Each of these unusual clouds appears to stem from a larger cloud. Their motions seem to be different from those of well-known molecular clouds around the nucleus (See Figure a, and c below).

These motions imply enormous kinematic energies (>1047 erg). Such enormous kinetic energy may be produced by an interaction with a supernova explosion or a bipolar outflow form a bright massive protostar. However, no evidence of a supernova or a bright protostar was found toward these peculiar clouds.   The origin is probably “something” other than well-known astrophysical phenomena; inactive stellar mass Black Holes. 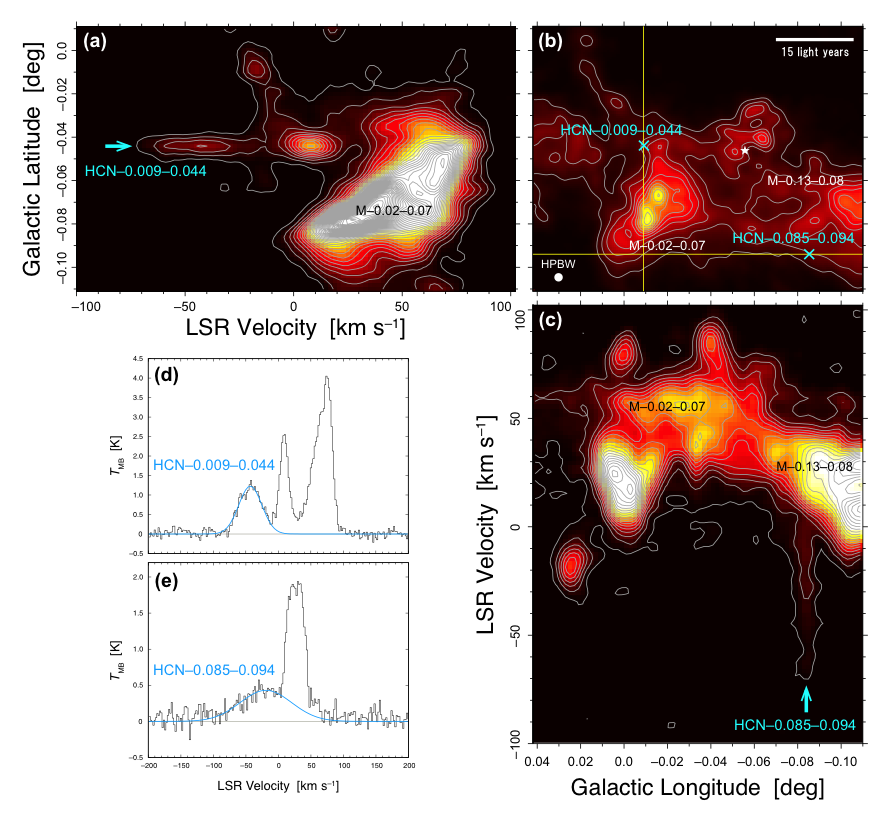 The data used to make this discovery (a) Position-velocity diagram along the yellow vertical line in the panel (b). (b) Integral intensity map of the Galactic central region around Sgr A* (shown by a white star) in the hydrogen cyanide (HCN) 354.6 GHz spectral line. The light-blue cross marks indicate the locations of the discovered peculiar compact clouds (HCN–0.009–0.044 and HCN–0.085–0.094). (c) Position-velocity diagram along the yellow horizontal line in the panel (b). (d, e) The spectral lines detected toward the peculiar clouds.

The team proposes that the high kinematic energy results from: “a high-speed compact gravitational source plunging into a molecular cloud and the gas is dragged along by the gravity of the compact source to form a gas stream.”

According this “plunge scenario”, such unusual clouds can be formed in two cases as follows:

In the case 1), the candidate for the plunging object is a massive star or black hole. In the case 2), the candidate is a hypervelocity star which moves so fast that it can escape from the gravity of the Galaxy. However, no hypervelocity star has been found in the Galactic center and the number is theoretically predicted to be much less than that of black holes. Therefore, the driving sources of the two discovered clouds are likely to be massive stars or black holes. In addition, no bright massive stars have been found toward these clouds. Thus, a “stray black hole” floating around the supermassive black hole is the most plausible candidate for each of the driving sources of the two clouds.

This work is very meaningful since the possibility that a number of “stray black holes” are floating around a supermassive black hole at the Galactic center was indicated by the observational study for the first time.

The team has already discovered the peculiar molecular cloud in the Galactic disk (Bullet) that may also be driven by a high-velocity plunge of a stray black hole (Yamada et al. 2017, https://www.nao.ac.jp/en/news/science/2017/20170202-aste.html).

These studies which are based on spectral line observations of molecular gas suggest a new method of potentially discovering inactive isolated black holes that are undetected by traditional method such as X-ray observations. The number of black hole candidates is expected to dramatically increase by applying research methods similar to this work.

Recently, by detection of gravitational waves, it has been confirmed that black holes merge and grow. The team has also discovered a candidate for an intermediate mass black hole with a mass of 100 thousand solar masses at a distance of about 200 light years from the Galactic nucleus

This intermediate mass black hole and stray black holes discovered in this work possibly contribute to growth of the supermassive black hole in future.

Inquiries about the research

These observation results were published as Takekawa et al. “Discovery of Two Small High-velocity Compact Clouds in the Central 10 pc of Our Galaxy” in the Astrophysical Journal Letters in July 2017.

This study was supported by a Grant-in-Aid for Research Fellow from the Japan Society for the Promotion of Science (15J04405).

Hawaii Island Inquiries about the research