The EAO are pleased to provide an early announcement of the second Call for JCMT Large Programs. This information is being provided ahead of the opening of the Call in order for current and new teams to pursue discussion and planning. Submissions will be accepted from February 15th up until the March 15th deadline. This will coincide with the 17B PI Call.

The call will open

The East Asian Observatory announces the opening of a second JCMT Large Program Call for the James Clerk Maxwell Telescope. Large Programs are defined by the observatory as projects which require significant amounts (> 200 hours) of observing time, require more than a single semester to complete and that take full advantage of the JCMT instrumentational capabilities to address multiple important scientific questions.

This call is aimed at continuing and growing the impact of the first generation of JCMT Large Programs undertaken as EAO/JCMT and the JCMT Legacy Surveys.

Submissions will be accepted from scientists in any of the East Asian Observatory regions (Japan, China, Taiwan and Korea) and participating JCMT regions (UK and Canada). For more information please read  the EAO eligibility pages. Any scientist from these regions is eligible to participate at any level (PI or co-I) in a survey proposal. Collaborations are strongly encouraged and subject to the requirements detailed below (see Large Program Definitions and Requirements). Multiple PIs are allowed for Large Program proposals.

Following the approval of a Large Program, admission to a Large Program collaboration will be opened to scientists from all participating regions until the start of survey observing. Membership management following that date will be at the discretion of the individual survey management team. The JCMT will provide assistance in maintaining survey sign-up and membership distribution lists and webpages as required.

EAO intends to allocate up to half of the available science time between August 2017 and the end of January 2020 (the end of 19B) to Large Program proposals that meet the required goals. The JCMT normally operates a 12-hour night, running from approximately 7:30pm to 7:30am HST.  Table A and Table B show source transit times during (roughly) the first and seconds halves of the year.

The table below shows the estimated distribution of available science time for surveys. This constitutes 50% of the total available time – the other 50% will remain available for P.I. projects. The hours are broken down in approximate distribution as a function of weather grade. Weather grade percentages per semester are derived from long-term averages (2003-2015) as determined by the CSO radiometer and 183GHz Water Vapor Meter (WVM) at JCMT. The figure provides the same hourly distributions, in graphical form. 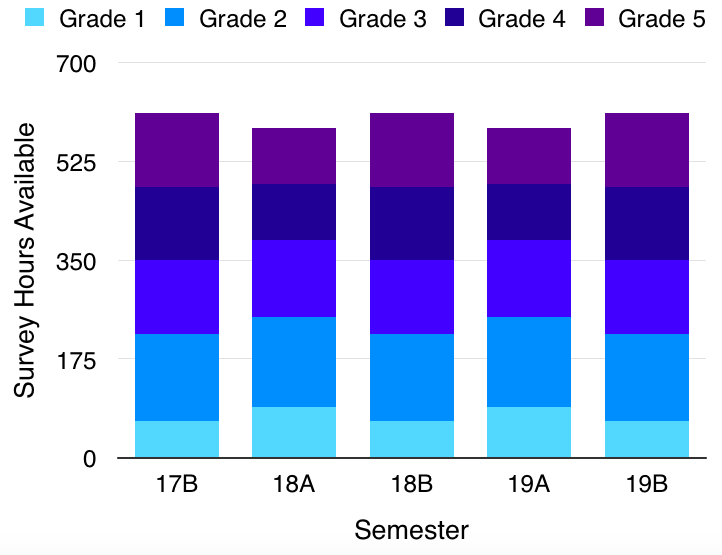 The Scientific Time Allocation Committee will assess all proposals during April and May 2017, and provide recommendations for survey time awards to the JCMT Board. The JCMT Board will determine the final allocations and award announcements will be made to successful P.I.s in June 2017. At this time, sign-up for membership to successful surveys will be announced and supported by the JCMT. Surveys will be asked to prepare for submission of observations to the observatory which will commence in August 2017.

The current status and availability of the JCMT instrument suite is here.

Integration time calculators or formulae are available, for

They should be used to calculate the integration time needed to reach a given RMS per channel or beam or output-map pixel as a function of receiver, frequency, observing mode, elevation and sky opacity.

Survey scientists are strongly encouraged to investigate the existence and availability of any previous JCMT data in their areas of interest. The JCMT Science Archive (JSA) hosted by CADC should be used to investigate this. We also encourage perusal of the information on the previous JCMT Legacy Surveys, and to make use of the clash tool used in previous JCMT semesters, which indicates whether sources entered are in regions that were observed previously.

This wiki is read only. To get an account on this wiki to edit and create new discussion pages please email h.stilmack <@> eaobservatory.org for an account.

Finally if you still have questions or concerns, please contact helpdesk@eaobservatory.org. For all users and potential users of the JCMT it is recommended to send an email to jcmt_users+subscribe@eaobservatory.org to subscribe to our JCMT email list for future telescope announcements.