A Transient search for variable protostars

– HOW DO STARS GAIN THEIR MASS?

Low-mass stars form via gravitational collapse of molecular cloud cores. Although their formation has received considerable attention in the last few decades, the rate at which a star gains most of its mass and the physics that drives the main phase of stellar growth is still not understood.  Most protostars have luminosities significantly fainter than the luminosity expected from steady accretion over the protostellar lifetime.   The solution to this problem may lie in episodic mass accretion — prolonged periods of very low accretion punctuated by short bursts of rapid accretion.  However, the timescale and amplitude for variability at the protostellar phase is almost entirely unconstrained.  Our long-term JCMT/SCUBA2 monitoring program of eight nearby star forming regions (NGC 1333, IC 348, OMC 2/3, NGC 2024, NGC 2071, Ophiucus Core, Serpens Main, Serpens South) is now providing measurements for accretion variability of protostars to understand the physics of the disk instabilities that drive this variability.   This program is first large, targeted survey for sub-mm variability and is opening up a new field of study.

Each field has been observed 9-10 times during the first 12 months of the survey.  The stacked images of two of the regions are below, with a total depth that is now comparable to the JCMT/SCUBA2 Gould Belt Survey.  The primary goal for this first year has been the development of data reduction routines that optimize the ability to calibrate fluxes.  Most sub-mm observations rely upon flux calibration based on calibrators and measurements of the precipitable water vapor, with an accuracy of roughly 10%.  Since our fields are crowded, we leverage the stability of the brightest sources in the region to calculate relative flux calibration, assuming that most sources are constant.  Our flux calibration uncertainty is now better than 3% in most fields. We are also able to align the individual region images to better than 1 arcsec, providing significant advantages for both stacking and blinking analyses.

Left: Histograms of the measured offset between each region’s reference field and its subsequent observations. Black represents the original offset without applying any correction; blue represents the corrected offset of the aligned maps. Right: The relative uncertainty in the flux calibration factors, calculated by finding the standard deviation of the normalised peak brightnesses of the calibrator sources in each respective image. Black indicates observations taken before November 2016, while grey indicates later observations.

These advances in data reduction now allow us to search for sub-mm variability within our fields.  We will be confident of any sustained change in flux of 10% or short-term change of 15%.  First results from this search will be published in 2017.  In addition, the deep stacked images will be analyzed to search for disks around young stars, find proto-brown dwarfs, and characterize filamentary structure. 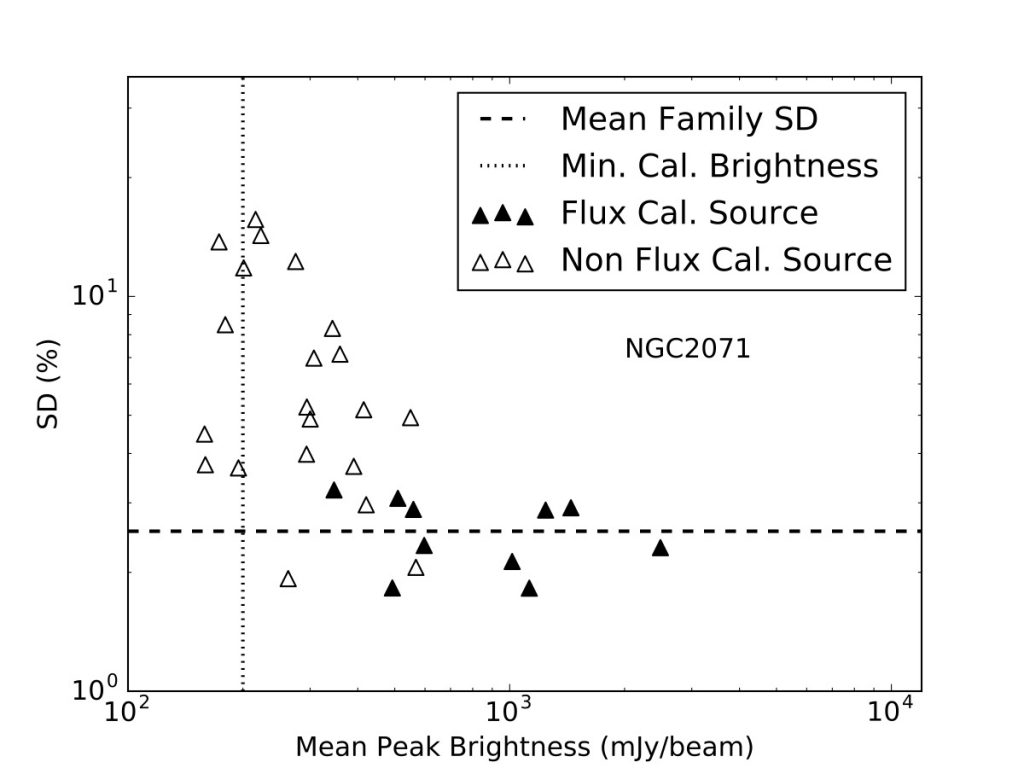 – The Transient ADS Library can be accessed here