HASHTAG is a new Large Program on the JCMT to observe the entirety of Andromeda with SCUBA-2 at 450 and 850μm, and we will also observe selected regions in CO(=3-2) with HARP. The project will start in summer 2017 and will use approximately 280 hours to complete observations. Our survey will make it possible, for the first time, to investigate dust, the ISM and star formation from the scale of a galaxy down to sub-GMC scales. With a resolution of approximately 25 parsecs, we will be able to study Andromeda with five times better resolution than studies based on data. The figure below shows the results of our pilot SCUBA-2 observations, and indicates the image quality that will be obtained with the full survey.

The 850μm (left) and 450μm map (middle) from our pilot programme which observed a 30´ region of M31. For both bands, we use data from either Planck or SPIRE to add in large-scale structure. The improvement in resolution from 36˝ for SPIRE 500μm to 7˝ for SCUBA-2 450μm is clearly apparent in the zoomed plot. To aid visualisation we have convolved the SCUBA-2 maps with a Gaussian with the same FWHM as the PSF. The full sensitivity is only achieved in the central part of the image.

Andromeda is an ideal laboratory for studying star-formation, the ISM and the properties of dust. As it is in the Local Group it has been intensely studied with observatiosn spanning the entire spectrum, and its proximity means in optical it is possible to detect individual stars. Within the Local Group M31 is special because it is the other big spiral, with a mass slightly larger than the Milky Way (Yin et al., 2009). Although similar in many ways to the Milky Way, it is also a useful contrast because it has a much larger bulge and less obvious spiral arms, with most star formation occuring in a ring.
The main science aims of HASHTAG are: 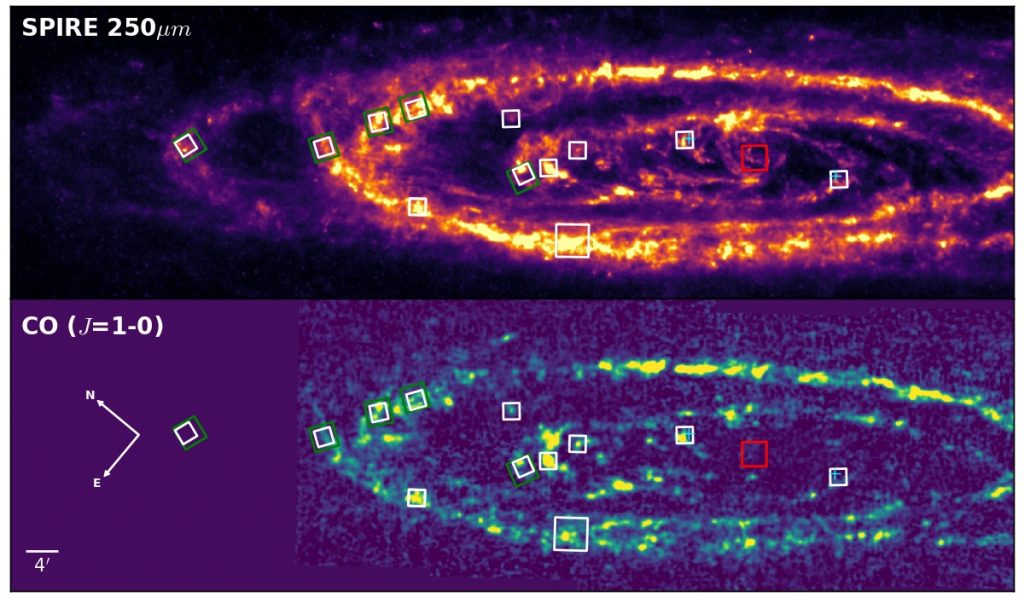 The proposed CO(J=3-2) observations with HARP overlaid on the SPIRE 250μm and IRAM CO(J=1-0) image. The white squares are our observed proposed observations with HARP, the green are the Herschel spectroscopy and the optical IFU regions covered by the SLIMS survey (Kapala et al. 2015) and the red is a CO(J=3-2) survey of gas regions Allen & Lequeux (1993); Loinard et al. (1996); Loinard & Allen (1998).

– The HASHTAG ADS Library can be accessed here