STUDIES and STUDIES-SXDS are the deep cosmological component of the new JCMT Large Programs. The goal is to detect the typical members in the dusty galaxy population that gives rise to the far-IR extragalactic background light, and to study the far-IR properties of the optically selected galaxy populations. This will be achieved by taking advantage of the best weather on Maunakea, the high angular resolution of JCMT at 450 μm, and the fast mapping speed of SCUBA-2.

The program has been allocated 330 hr on SCUBA-2 under grade-1 weather, to obtain an ultra deep, confusion limited 450 μm image in the COSMOS-CANDELS region: Such a map will supersede all other far-IR selections in sensitivity, enabling the detections of galaxies that are ~ 10× less luminous than the faintest galaxies in confusion limited 850 μm images, essentially all LIR > 1012 L⊙ galaxies at z < 4, and the majority of LIR > 1011 L⊙ galaxies at z < 2. This will provide a more complete census of dust obscured star formation and AGN activity in the key epochs of the growths of galaxies and supermassive black holes, ~ 2 Gyr after the Big Bang, on comoving scales of > 20 Mpc. Sensitivity forecast for STUDIES. Curves are FIR luminosity functions of galaxies at z < 3, extrapolated from Burgarella et al. (2013). The crosses mark the luminosity range probed by confusion limited Herschel surveys at 500 μm, assuming the Td–LIR relation in Symeonidis et al. (2013). The solid portions of the curves indicate the luminosity range probed by STUDIES, assuming the same Td–LIR relation. The red circle indicates the size of the predicted 1-σ error for the STUDIES luminosity function at z ~ 1 in the lowest luminosity bin (ΔLIR = 0.5 dex).

STUDIES will not only detect the typical members in the dusty galaxy population, but also the brighter members of the normal galaxy population selected from deep optical/near-IR images. STUDIES will have strong synergy with the much wider S2-COSMOS survey, another cosmological component of the JCMT Large Programs, as well as ongoing ultradeep Subaru and CFHT imaging in the same area. The data will have high legacy values, as the survey field has the best multiwavelength coverage, accessible to ALMA, and closely tied to the existing S2CLS data. Together with the S2CLS and S2COSMOS, STUDIES will push our understanding of dusty objects to a new front. Please contact the PI or regional coordinators for additional information.

STUDIES-SXDS is a new JCMT Large Program approved in 2017. It is to add a second ultra-deep pointing to STUDIES, in the Subaru-XMM Newton Deep Survey field (aka. UDS) within the CANDELS region, with 319 hours of observations. It will have the same sensitivity as the original STUDIES pointing in the COSMOS (STUDIES-COSMOS). We expect a final sample size of ~ 600 or more from STUDIES-COSMOS and  STUDIES-SXDS.  This sample size will allow us to better understand the evolution of the star-forming population  at z ~ 1 to 2, the peak of the cosmic star formation and the onset of the cosmic downsizing. The 2x increase in survey area brought by STUDIES-SXDS will also allow us to find rare objects, such as high-redshift (z > 4) dusty galaxies and H-alpha/Lyman-alpha line emitters. 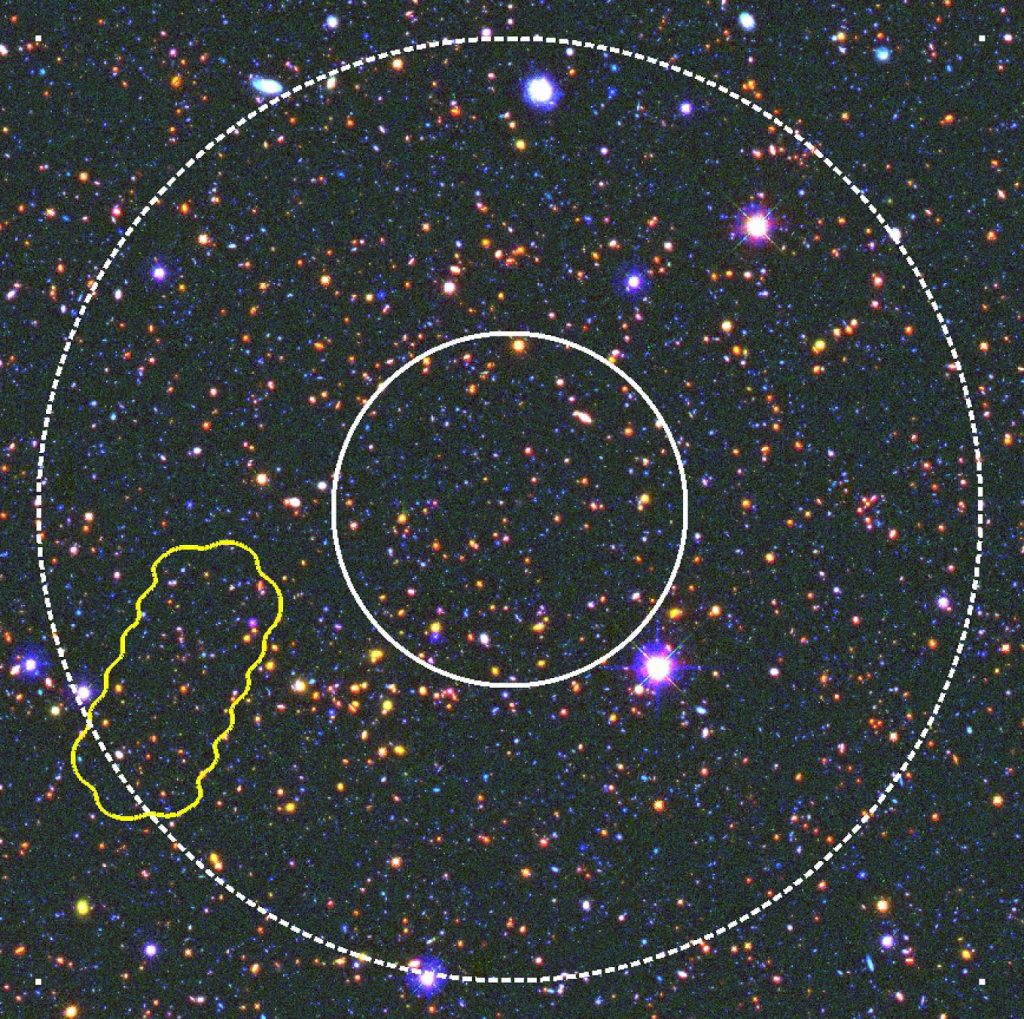 The STUDIES-SXDS pointing. This is the same as the SXDS pointing in S2CLS, but will be much deeper. The background image shows the optical and near-IR images in the field (U-band to 3.6 um). The inner solid circle has D=3’, and is where STUDIES-SXDS will reach 0.57 mJy. The outer dashed circle indicates the outer area of the Daisy map where the sensitivity will be ~ 1 mJy. The yellow contour is an area surveyed by ALMAat 1.1mm (PI: Kohno).