The Nearby Evolved Star Survey (NESS)

Near the end of their lives, low- and intermediate-mass stars ascend the Asymptotic Giant Branch (AGB), becoming extremely luminous and ejecting a large fraction of their mass in a dusty wind. The Nearby Evolved Stars Survey (NESS) targets a volume-limited sample of mass-losing AGB stars to derive the dust and gas return rates in the Solar Neighborhood, and constrain the physics underlying these processes. AGB stars have long been assumed to be the main contributors to the interstellar dust reservoir, but recent observations at high redshift have cast doubt over that assumption, and it is therefore important to properly quantify both the interstellar dust mass in galaxies, and the dust production rate by AGB stars. In the last decade, much work has been done on nearby galaxies, such as the Magellanic Clouds, but a good quantitative analysis for the Milky Way itself is still lacking. With this ambitious program we aim to fill that gap in our knowledge through a multi-pronged approach.

Observing our sample with SCUBA-2, thus extending the infrared spectral energy distribution to the submm, reveals the coldest dust tracing historical mass loss. Second, targetting our sample in the CO(3-2) and CO(2-1) transitions exposing the gas outflow. Nearby targets will be spatially resolved in both continuum and CO lines, making it possible to resolve variations in the dust mass-loss history and gas-to-dust ratio. We will also observe selected targets in the 13CO (2-1) and (3-2) lines to measure the 13C/12C ratio. It remains challenging to systematically measure CO gas mass-loss rates outside the Milky Way, and NESS therefore is key to deriving the gas-to-dust ratio in stellar outflows and characterize the physical conditions in the outflowing dusty gas.

The first stage of NESS aimed to observe almost 300 evolved stars within 2kpc visible with the JCMT, while the southern sky is covered by APEX in Chile. In the second stage, we are focussing on understanding the contributions of different kinds of evolved stars by expanding the distance by a factor of 1.5, so that we have nearly 600 stars to work with. The sample is divided into five mass-loss rate bins over 7 orders of magnitude. High mass-loss objects are rarer but more luminous, and this sample is therefore be complete tp the largest distance. In the lowest mass-loss rate bin we can only observe objects in the direct vicinity of the Sun, out to 300 pc. Measuring the 13C/12C ratio provides constraints on existing nucleosynthesis models, while further goals include the detection of non-sphericity of the circumstellar environment; the determination of the outer radius of the CO emission, set by the CO dissociation by the interstellar radiation field; and correlation of the mid-infrared dust properties with the mass-loss. Very deep observations of objects that are just starting to lose mass will reveal the transition between chromospheric and dusty winds, particularly relevant to the future of Sun-like stars. 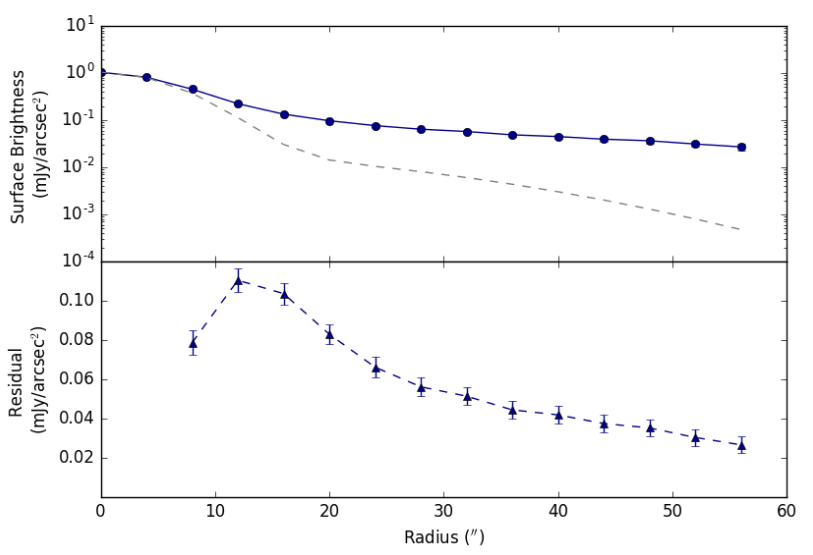 Radial profile of W Aql derived from SCUBA-2 850μm observations (Dharmawardena et al., in prep).The lower panel shows the residual after subtracting a point-source profile (the SCUBA-2 beam, Dempsey et al 2013) from the observed profile. The resulting profile corresponds to a lower limit on the extended component of the sub-mm emission. 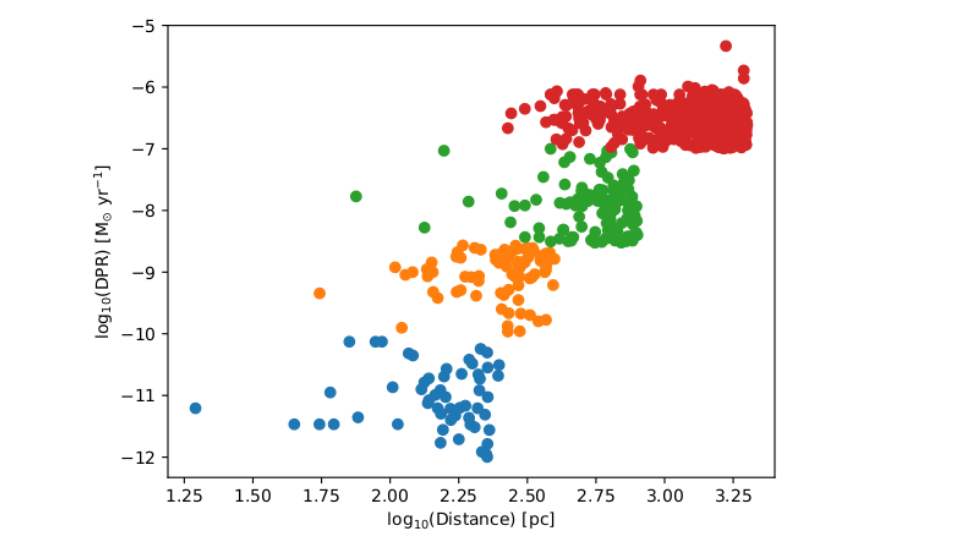 Distance vs dust production rate (DPR) for the NESS sample. Each colour corresponds to a different sub-sample in mass-loss rate.

– The NESS ADS Library can be accessed here.