The 230 GHz band receiver on JCMT covered the frequency range 212 to 274 GHz.The half power beam width is about 20 arcseconds at 230 GHz.

The receiver is a single receptor Dual SideBand (DSB) system. The IF bandwidth is 3-10 GHz but due to software limitations the LO is always 4 GHz away from the center of the observed band. Observing with an IF <4GHz causes high system temperatures and should be avoided.

For calibration an ambient and a LN2 (Liquid Nitrogen) load are used. The receiver was built by HIA and delivered in 1998. The mixer in the receiver was replaced late in 2015 with an ASIAA supplied SMA type mixer. This mixer is designed for a slightly lower frequency range. In the JCMTOT the receiver then was renamed from RxA3 to RxA3m. RxA3m was used between May 1st, 2016 and June 23rd, 2018 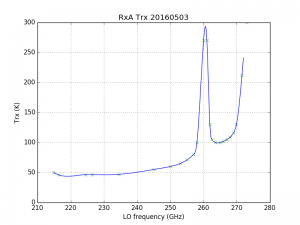 A plot of the receiver temperature of RxA3m as measured in June 2016 shows a degradation towards the upper part of the band, In addition there is a strong peak around 260 GHz LO frequency. This is caused by a lack of LO current and the peak value is sensitive to environmental conditions. However, lines can still be observed in this region by selecting the appropriate sideband to get the best performance. This is done automatically if best SB is selected in the observing tool.

The sideband ratios of RxA3 and RxA3m are noticeable different (and different for A3 and A3m)  and change across the band. This means that line intensities are different when observed in Lower Side Band or in Upper Side Band. The online data-acquisition software multiplies the data with (1+Gi/Gs) = 2 since it assumed Gi/Gs = 1 where Gi is the image sideband gain and Gs the signal sideband gain.

For RxA3m we have derived an empirical sideband ratio correction (see below), in terms of a lower sideband gain ( Gl) and an upper sideband gain (Gu). The data need to be multiplied with (1+Gl/Gu)/2 when the line is in the upper sideband and (1+Gu/Gl)/2 when the line is in the lower sideband.  For RxA3m data these corrections are now applied  automatically by the newest development version of ORAC-DR pipeline. Alternatively one can use a PICARD script (also from the development version) if you have already reduced data. A description of the derivation of these corrections are on this link: RxA3m-SB-Notes. We have also re-reduced all RxA3m data so that as of July 2019, reduced RxA3m data in the JCMT Science Archive will already have this correction applied.

RxA3 took observations between December 5th 1998 and December 31st 2015. We do not currently have a sideband correction for RxA3 observations  Unfortunately as we do not have as much systematic data available (we took paired observations of the same line in both sidebands for RxA3m), we will probably only ever be able to derive a correction for a limited LO frequency interval (~218-246 GHz). Please contact the observatory if you have questions about this.