Each night, pointing data is logged in a file called POINTING.log. This file contains many variable describing the state of the telescope and the source but the key values are;

Any systematic errors in the pointing model will generate large-scale error patterns over the sky. Pointings need to be made, therefore, often enough to follow and compensate for these errors. In practice, this is well accomplished by hourly pointings when a science field is being observed for multiple hours (‘tracked’), but certainly a new pointing is required before each new science observation.

observations are made by taking spectra in the direction of the nominal position of source and then towards four positions offset by half of the beamsize.  (Heterodyne pointing and focus observations are not calibrated by hot and cold load measurements).

The results of an example (HARP) pointing experiment are shown below. The inset (blue) spectra correspond to the positions within the ‘five-point’ indicated by the small arrow.  The color scale used in displaying the fivepoint usually relates white with the strongest spectral line strength 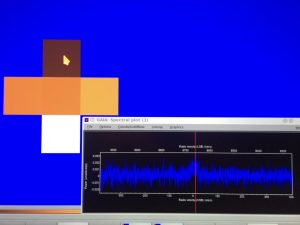 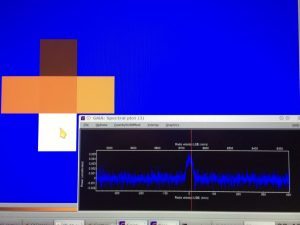 The line appears strongest in the bottom-most of the 5 positions. The extent of the line is contributed interactively by the TSS (see the red vertical lines in the figure below): 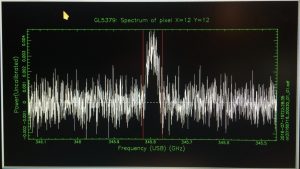 . . and the pointing software derives the line intensities at each of the 5 positions and fits a Gaussian in both directions to determine the location of the peak line strength 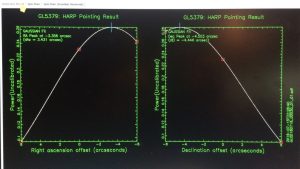 The resulting pointing correction is then applied.

Focussing the telescope essentially involves moving the SMU to the optimal in-focus position. The focus can be adjusted in 3 dimensions – x and y which move parallel to the elevation axis (x) and perpendicular to it in the same plane (y), then the z axis moves the SMU in and out of the dish itself.

The focus model encompasses a number of contributing factors that determine the best position of the SMU. These are:

Movement in the Z axis varies most throughout the night and is checked most often.  During a focus observation, spectra are taken with the secondary mirror at each of 7 positions  spaced by 0.3mm along the Z-axis, which is the direction between the primary and secondary surfaces.  The spectral line is recorded at each position. 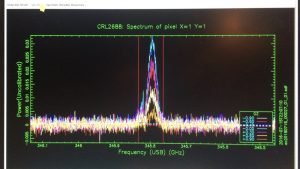 and the integrated line strength of each spectrum is extracted by the fitting of a Gaussian to the resulting (uncalibrated) intensity values. A curve is then fitted with the SMU position at the peak representing the optimal position of the SMU along that axis – where the signal strength is the strongest. 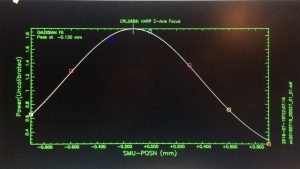 Similar observations when adjusting the SMU position (by 1.0mm) along the X- (up-down) and Y- axes allows for total optimization of the SMU configuration (‘focus’!). We typically do ‘focusses’ in Z, X & Y at the start of every night, again after 2 and maybe 4 hours, but less frequently in the second half of the night as the telescope settles, thermally.

In Z we aim to be within about lambda/10 or about 0.1 mm, noting that 0.3 mm ~ lambda/4 is a significant offset. In X and Y we are less sensitive – our standard step is 1 mm or about lambda. After 3 steps the signal is almost gone. So in these cases you would like to be better than say lambda/3 or so.

Z focus changes most at the beginning and end of the night when the temperature changes most rapidly. The support arms for the SMU have a 0 thermal expansion efficient, however the dish itself does expand and contract. As temperature rises the dish expands outwards and the SMU is pulled inwards; as it contracts the SMU is pushed upwards.

There is a corrective term which compensates for change in the Z focus due tot expansion of the dish. Unfortunately this value is currently determined using the mean leg temperature rather than the actual dish temperature. The concern is that there is lag in the temperatures with the thin dish responding much more quickly to changing temperature than the thick legs. Changing the x and y focus necessarily affects the pointing of the telescope. There is a fixed relationship between the mm moved in x/y and the pointing offset, with 1mm = 24.56″. When a change is made to the X or Y focus, the TCS automatically adjusts the position of the telescope to compensate for the change in pointing. This happens when the results of a focus observation are accepted. If one were to change the X or Y collimations in the engineering files, this automatic compensation would not be made and a large pointing shift would be expected.

Each instrument has focus collimation terms or the ‘instrument-dependent offset’. If the receiver cabin were perfect and each receiver was optimized to receive from the center of the TMU then these would not be necessary. However each receiver has its own spot on the TMU which feeds the beam into it and the adjustments in collimations reflect this. These collimaton terms are kept in the intrument.ent files at the summit.

are short daisy observatons analyzed for the image centroid.